The History of Shaykh Ahmadou Bamba and Founding of the Murid Sufi Order.

It is with great pride and pleasure that we are seizing the opportunity to honor the memory of a great Muslim leader who devoted his entire life to the service of Allah and championing the good causes of education, equality and the preservation of human dignity of his people. This man is the beloved leader and founder of the Murid Sufi path in Senegal, West Africa: Shaykh Ahmadu Bamba Mbacke (1853-1927). 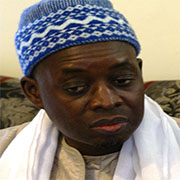 Shaykh Ahmadou Bamba was born in 1853 in Mbacke Baol, a small village in Senegal. He memorized the Holy Quran at a very early age. He was well educated in the different fields of Islamic sciences and the Arabic language. He wrote many books in the field of religious sciences and the Islamic faith. He was a fine poet whose poems (Qassayid), dedicated to the prophet Muhammad (PBUH) and Allah (SWT), are immortalized into chanting performed by choirs called Kurels in the Wolof language.

As David Robinson notes, the Moors felt superior toward black inhabitants because they were “white”, not “black”; they were “Arabs” who were “natural Muslims”, not “recent” converts to the faith.

Babou also notes that Bamba experienced how the fraternity between Muslims so recommended in the Qur’an and the prophetic traditions could be ambiguous in practice when it involved people of different skin color and cultures, because many Arab Moorish leaders did not have much regard for their Senegalese black colleagues. This attitude incorporated the ideas of inclusion and diversity into the movement that were very appealing to the downtrodden and the wretched in the Senegalese society of which over a century later remain two of the main attractive concepts capturing the essence of Muridiyya.

The Birth of the Movement

The period covering 1850 to 1920 corresponds to one of the most turbulent moments in Wolof empires of Jollof, Kajoor and Bawol in Senegal caused by French colonization and religious wars in the regions. It is in this context that the Murid Sufi Order or Muridiyya was founded by Shaykh Ahmadou Bamba Mbacke in 1883.

The Senegalese society was undergoing a deep crisis at all levels of its social structure, whether political, religious, economic and cultural. The French colonial authority was ready to deploy its agenda of economic exploitation and cultural assimilation after defeating all armed struggle resistance against colonial penetration.

In this critical period of time, Shaykh Ahmadou Bamba believed that the most valuable struggle against the colonial authority was to be based upon how strong one could keep his or her identity, believe in oneself and rely on his or her own resources. To him, that tremendous goal could only be achieved by relying effortlessly in the search of knowledge and effective education through hard work. Those were some of the main grounds for his stance as highlighted in his statement:

“Allah is my witness, I’m a servant of Him who works on Muhammad’s field and the means I will use to struggle against the colonial authority are knowledge and piety” (holding strongly to my identity).

The Founding Principles and Objectives of Muridiyya

The objectives of his movement (Muridiyya) were to challenge the status quo in Senegalese society characterized by deep social injustice, religious obscurantism, economic degradations of lower class people, warfare between local chiefs vying for political power to legitimate French colonial agenda, cultural degeneration accentuated by the presence of a foreign culture that intends to annihilate African traditions and Senegalese way of life, thus, triggering the cultural identity loss of many Western educated Senegalese sons and daughters.

In order to protect and preserve the identity of his followers he designed a strategy that was inspired by the peaceful teachings of the Quran.

The strategy devised by Bamba could be summarized in the following 12 principles:

1. One must have a clean heart, try his or her best to do and say good things all time, anywhere they can be.

2. One should strive in following the guidance of Islam which provides goodness to the human being.

3. Follow only the Holy Quran, the tradition of Muhammad (S.A.W) and Muslim scholars’ consensus.

4. Shun what is not related to Islamic canonical teachings antithetical to its tenets.

5. Accept the lawful, and reject the unlawful.

6. Be truthful and resilient to Allah’s decrees.

7. Be self-reliant and not be a burden to society and others.

8. Be helpful to all the Muslim community in righteousness and piety.

9. Do not involve yourself in other people’s business unless you are invited to do so.

10. Focus on your personal imperfections and how to correct them.

11. Total acceptance of the divine decree.

12. Be always a source of inspiration and goodness to others.

Following these aforementioned principles drawn from core Islamic tenets, Shaykh Ahmadu Bamba began expanding his movement to the four corners of the country, beginning 1884 AD, three years following his father’s passing. He put forward a strategic occupation of lands which consisted of clearing large inhabited areas, with his disciples of the first hour, to build village-schools, creating, thus, learning centers and farms for sustenance of students that were joining these settlements in large numbers.

They sought refuge from unprecedented dissatisfying colonial administration rule of law in their land, and also looked forward to being the first to get a fresh start with these innovative methods of education of Shaykh Ahmadu Bamba that blend a fresh pedagogy incorporated into remolding the soul of the disciple, a new brand of disciplehood, which did not please the status quo, paralyzed by old traditions of book based knowledge and memorization only.

Among those villages and learning centers were: Daaru Salaam, Tuuba, Daaru Aleem and Daaru Mannan. Tuubaa, the epicenter of Murid life, has grown to be the second largest city of Senegal and a center point of economic vitality growing at a rapid pace.

Disciples embracing Muridiyya came from all walks of life. From the Buur (kings) to the Badolos (countrymen). Each group designing an exit strategy to break away from the alienating chains of colonial rules, or seeking salvation or ways to improve their knowledge about the Islamic faith, thus, surrendering to Shaykh Ahmadu Mbacke for their salvation in this world and the hereafter.

It was not long before the situation began to worry the French authorities, and jealous local chiefs representing their interests. They later decided to deal directly with Ahmadu Bamba, following false intelligence that he was piling up weapons and raising an army to wage Jihad against them.

Decision was made on August 10, 1895 to arrest him. On September 5th of the same year after the conclusion of a meeting of the colonial authorities private council, Shaykh Ahmadu Bamba was subject to an ordinance of deportation to Gabon and the Congo, where he will remained for more than 7 years, with the intention of isolating him from his followers, and wither his growing organization impeding their agenda of  ” Mission Civilisatrice” geared by economic exploitation and cultural assimilation.

During those exile years, the French authority did everything at their disposal to physically eliminate him. Shaykh Ahmadu Bamba survived and foiled all their atrocious plans and villainies with the grace of Allah.

November 11, 1902: After many unsuccessful attempts to dominate him and psychologically weaken him, the French not only backed away from their decision to send him to Madagascar Island, but also decided to send him back home, to Senegal. Shaykh Ahmadu Bamba finally returned to his native land, where after only 7 months the French authority decided again to send him away.

June 13, 1903: The colonial authority falsely accused him of collecting weapons to wage a holy war against them, and then transferred him to Mauritania next to a Moorish Shaykh whom they believe could convince him to accept the colonial administration deals of following their orders.

March 7, 1907: Ahmadu Bamba was transferred back to Senegal in (Thieyenne) a very small village in Jollof, where he was under house arrest and visits were strictly regulated. He was not allowed to meet with more than six people a day. Despite these constraints an uncontrollable flux of people kept on flocking to him from the four corner of the country.

January 16, 1912 : The administration grew tired of writing passes for the many visitors and decided to transfer him back to (Jurbel) ,the economic nerve center of the French administration located in the center of Senegal, in order to closely monitor his movements and visitors. He was the subject of many administrative reports by then commandant de cercle of Jurbel.

Ahmadu Bamba fought all his sentencing with non-violent methods. In spite of his enemies merciless torturous methods which culminated in a physical elimination attempt by a firing squad, he never failed, or back down from applying the tenets of peace, love and mercy as fundamentals to the Islamic faith teachings, to overcome physical pains, mistreatments, inhumane detention practices, chastisements, psychological and emotional abuses.

The very first words he uttered, when he descended the ship bringing him back home from Gabon, to address the welcoming crowd, were: – “I have forgiven all my enemies for the sake of Allah, who protects me. I do not fight back or retaliate.” Shaykh Ahmadou Bamba

I hope this brief expose has described the many reaseons behind the birth of the Muridiyya Sufi organization and the many humanistic facets of its founder, Shaykh Ahmadu Bamba, a great Islamic figure and African leader who dedicated his life for a better cohabitation of all races on earth. His legacy is still alive and very well preserved, maintained and propagated by his heirs, and decades after Paul Marty’s* statement in his report to the Commandant de Cercle in which he was declaring the demise of Shaykh Ahmadu Bamba’s movement once he is deported and isolated from his followers, which turned out to be wrong.

*Paul Marty was Frenchman born and raised in Algeria who started working for the French administration in his early twenties. Due to his fluency in Arabic and his understanding of Muslim culture, he was brought in by the Colonial administration to observe closely Bamba and his disciples and write detailed reports to his boss. In many such reports he wrote that Bamba’s organization and followers will not survive his isolation over time and that could lead to the demise of his religious movement, which prompted the Private Counsel to exile him in Gabon from 1895-1904.